Why Wikidata is so important to Histropedia

The following is a guest post we received from our friends at the Histropedia project. We met at Wikimania 2014 in …

The following is a guest post we received from our friends at the Histropedia project. We met at Wikimania 2014 in London and they told us how Wikidata is useful for them. Here is their write-up.

For those who don’t yet know; Histropedia is a project using Wikipedia and Wikidata to create the world’s first timeline of everything in history.
Earlier this year I wrote on the Histropedia blog about how important Wikidata is for our project. At the time we had just switc 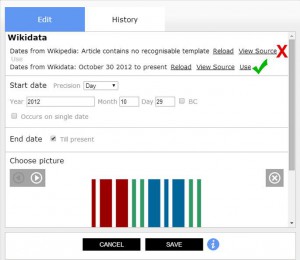 hed from trying to get dates from Wikipedia articles (from the infoboxes) to using Wikidata items. We had a reasonable amount of success with the infoboxes, but encountered some major limitations. Firstly we were only able to get dates precise to a year, and in some cases we were unable to recognise the date format used to even get the year. And of course there were the articles with no infobox.
By switching to Wikidata as the primary source for dates we immediately added over 700,000 date properties to our events, often to a much better precision than just years. This was incredibly important to the project as it not only greatly improved the accuracy of our timelines, but also allowed us to increase the available zoom levels. So now thanks to Wikidata we can zoom right in to see a day by day view of History.

In the previous post I also mentioned that improved date precision was only the first of many amazing things we hope to achieve by using Wikidata. And last month during Wikimania London we were able to unveil a new tool that lets us automatically create a timeline using a Wikidata query, which in our opinion definitely counts as amazing! 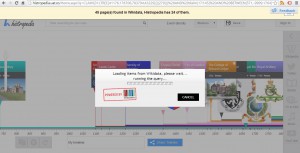 The feature is currently using Magnus Manske’s tool to run the query, Histrobot (our busy little timeline bot) then checks for matching Histropedia events and adds them straight to the timeline. There are limitations; Histropedia currently can’t handle more than about 500 events without suffering some performance issues, we are not yet completely synced with Wikidata so there are some items that don’t have events yet, and of course if the Wikidata item doesn’t have the required date properties the event will only be added if we have a date from Wikipedia or someone has manually added the dates on Histropedia.

We are working on these issues, increasing the number of events we can display is a major priority and we are making good headway in this area, we hope to soon have a solution in place that will keep us more up to date with Wikidata, and we are doing our best to encourage anyone editing Histropedia (small numbers, but they are growing) to go and edit Wikidata instead of Histropedia so we can all benefit.

But even with the current limitations this tool is incredibly powerful, and there are so many amazing timelines that can already be created. For example here is a timeline created straight from the a query showing everything that took place within a 2km radius of the Wikidata offices in Berlin:

As you can see in the URL above, the tool works by simply appending the query to our url. In the future we will try and add a more user friendly interface to the feature and some clever little auto queries, for example we were thinking when hovering over an event a user would be able to simply choose the radius and create a timeline, like the one above, based on the location of the event.

We also plan to allow users to attach queries to timelines in our upcoming directory. The contents of these timeline would be automatically updated, allowing users browsing timelines to always experience the latest improvements to Wikidata.

Eventually we want to be using as many Wikidata properties as possible, not just for instant timeline creating but also for categorisation of our events, so when you are looking at a timeline you will be able to filter by any property available on Wikidata. For example you could be looking at a timeline of missions to mars (like this one) and use filters to automatically colour code the successful and unsuccessful missions, or whether the mission was a lander, obiter or fly-by. With the ever increasing number of properties and items in Wikidata we should eventually be able filter timelines by almost anything imaginable.

We already have several Wikidata related features in our ideas forum where we are collecting votes and feedback to help us choose the best order for future development of Histropedia.

Show Charts in the timeline background (from file, statistics or Wikidata)

Automatically generate the local history of a person or other event

Automatically add descendants and relatives of a person to the timeline

So that’s what Wikidata can do for Histropedia. It has become a fundamental part of how we are going to achieve our final vision and we can’t wait to incorporate more Wikidata power into Histropedia, it’s going to be awesome! But what can Histropedia do for Wikidata? Hopefully a lot!

We are already trying wherever we can to use Histropedia as an example of why Wikidata is such an important project and encourage people to start editing Wikidata. We have also made it very easy for people using Histropedia to edit Wikidata, instead of Histropedia, and we are trying to encourage our users to do this. However there will probably be a lot of dates entered straight into Histropedia and we would love to develop a system so that this data could be imported straight into Wikidata.

The Histropedia database could also be used for comparison with Wikidata, flagging up a list of differences that could then be investigated by the community.

Another way we hope Histropedia can help Wikidata is as a tool to visually spot errors in Wikidata. Because Histropedia is a very visual way of viewing the data we believe that running certain Wikidata queries on Histropedia will help identify errors, for example this query showing people born in 1950 makes it very easy to spot potential errors.

These are just a couple of examples and we hope to work together with the Wikidata community to expand on the possibilities our visual nature offers for this type of work.

Our vision for Histropedia would not be possible if it wasn’t for Wikidata, so obviously we have personal reasons for wanting to see it become the very best resource it can be. However we are also huge fans of Wikidata and what it is trying to achieve and we believe in the potential impact it will have; not just for Wikimedia community, not just for Histropedia, but for the whole world!

Thank you Wikidata, and please keep up the amazing work you are doing!