The Central and Eastern European (CEE) meeting 2017, took place in Warsaw from September 22nd to 25th. Four staff members from Wikimedia Deutschland participated. Here, they tell about why they were there, and what they are working on. 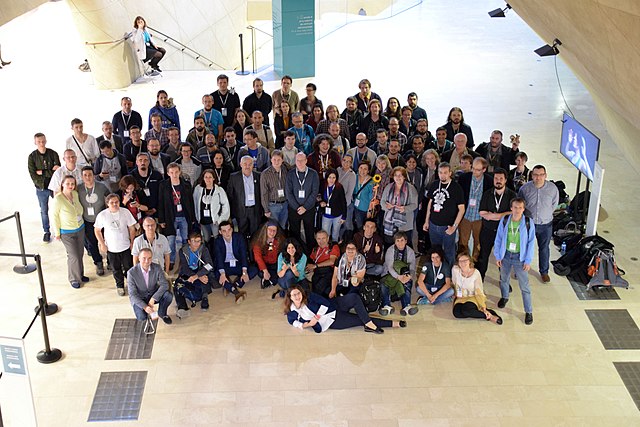 Group photo of the meeting of the Central and Eastern European organizations, groups and communities
(by Lantuszka, WikiCEE Meeting2017 day2 -29, CC BY-SA 3.0)

“The CEE is currently THE biggest regional Wikimedia group: the language communities represented there range from Finnish to South Azerbaijani, from German to Bashkir. It is also the strongest regional group.” Says Cornelius Kibelka, the Program and Engagement Coordinator of the Wikimedia Conference, who was also on the selection committee for this CEE meeting.

Cornelius was at the CEE meeting because part of his job is to connect the different Wikimedia conferences better, or as he puts it: “We want to “build bridges” to other Wikimedia Movement events, we want to continuously keep a conversation going about certain themes or topics.”

– But why keep these conversations going between events – why is it important to build bridges between conferences?

“One reason is that the majority of people in the Wikimedia Movement are non-native English speakers, but many of our important conversations always take place in English, and online. That’s really tiring, also for me, it’s easier to meet each other in person to understand what challenges people are facing.”

In 2015 and 2016, Cornelius was the only WMDE staff member at the CEE meeting, but this year he convinced two colleagues to come along: Veronika Krämer, responsible for international aspects of volunteer support; and Nikki Zeuner, who works on Partnerships, and is in the Partnerships and Resource Development group. Both Partnerships and Volunteer Support are on the Wikimedia Conference program, and Cornelius has been working to support a stronger international network around these topics.

– Veronika, why were you at the CEE meeting?

“I’m part of a Volunteer Supporters Network, which gives volunteer supporters the opportunity for exchange, for learnings, for sharing and using resources, asking each other questions, getting inspired by others. At the CEE meeting, they were specifically looking for talks in the field of volunteer support, and so I asked my colleague from Poland, Natalia, if she would do the talk together with me.”

Veronika was also there to establish a closer relation to other Chapters, in particular the Polish:

“Even though they’re smaller, I think we still have a lot in common – for example they have something like a Polish WikiCon. There has also been requests from the German community to do something with the Polish community. And also, for the first time, I met my Serbian counterpart, and learned about some interesting projects that are going on in Serbia, so I convinced her to join our Volunteer Support Network meeting in November – that was also a thing I wanted to see; if we could get people interested in that.”

– What kind of discussions did you have about volunteer support – were there any highlights?

“One discussion that I was partly involved in, and that comes up again and again, is the question of prizes for competitions, for example Wiki loves Earth or writing competitions, and I find it quite interesting to compare how people go about the prizes. Together with Raimund Liebert from Wikimedia Austria, and Muriel Staub from Wikimedia Switzerland, we wrote a learning pattern about appreciation of volunteers. – Now, the talk that I was giving was about motivation. And prizes relate to both of that. Another thing I took from there was; it’s very interesting how they go about gaining new volunteers in Serbia, with their “Wikicamps”: It’s basically a full immersion wiki workshop over 5 days, and people remain very active afterwards. Usually, a wiki workshop is only an afternoon. So that gave me a couple of ideas of how one might do that differently.”

– CEE is a regional conference, but on a greater scale, is it even possible to have a Volunteer Supporters Network that includes countries from Sweden to India?

“The CEE meeting is the first regional conference that I’ve been to, and actually there was a couple of things I really liked about it: one was the size of it, it’s not as overwhelming as Wikimania. I think the smaller size allows for bonds to form more easily, and that’s what’s important for collaboration. But then again, at WMCON and Wikimania you understand that what also defines us as a movement is: there are a lot of differences! That’s why both types of meetings are important. Something regional, like CEE, is more practical, and more focused on a specific content. So, neighbouring countries are probably always a good place to start at least.”

Getting to Free Knowledge through Partnerships

Like Veronika, Nikki explains that the CEE meeting for her was an opportunity to talk to people from other Wikimedia organisations, and she also facilitated a sharing and learning workshop (video) about how to work with partners:

“Rather than telling people how to do a partnership, I wanted to have more of a dialogue in a participatory format, so I created a frame where people could talk about partnerships, and then get “consulting services”, so to speak, from the other people in the room. That worked really well, and we took it all back to the main group, and derived learnings from that – I think WMDE has a role in facilitating these kinds of conversations rather than teaching people how to do partnerships.”

– Can you elaborate a little on what is meant by the term Partnerships?

“In the case of WMDE it’s either partnering with other Wikimedia organisations, or with allied friendly organisations. If you open that up to a Movement context we’re part of a ‘knowledge eco-system’, we’re not a project anymore that works in isolation. We can’t free any content, if we don’t work with the institutions that are sitting on it, it’s really that simple. Or, if you take the example of a school: “School” is a whole system that you need to understand. Do you start with the teachers, the principal, or the district? Volunteers are the ones that go into the classroom and teach Wikipedia to kids, while the Chapter can help with funding, tools, materials, whatever it takes to convince the school district, and increase the impact. So, I think there could be this whole choreographed dance that involves the volunteers, the partners, and the Wikimedia chapters, that’s kind of what I envision.”

– And how do Partnerships relate to the community of volunteer contributors?

It has to do with: how do we choreograph that dance? What can WMDE do to best support the volunteers working with external partners – so that we can achieve our mission. And I’ve been listening to a few stories now for some years, of people sharing how they do partnerships, and you can always find new little interesting nuggets of information in there. On the other hand, people often come up with the same stuff, and then others can learn from the experience. Barbara Fischer a few years back wrote a learning pattern for example, about working with GLAMs– that is still really helpful.”

In talking about partnerships on an international level, Nikki says: “One dimension is the sharing and learning about how to do partnerships – and the other dimension is to actually do it. There’s all sorts of configurations that you can think of, and they would all end up providing more impact than we can as an organisation on our own. I think there’s a lot more room to grow as a movement, and we  – Wikimedia Deutschland – can have a role in it.“

An honest opinion about the Strategy process

Nicole Ebber also went to the CEE meeting. She is Adviser on International Relations at WMDE, and has been leading the so-called ”Track A – Organized Groups – ” of the international movement strategy process. Nicole, together with with Kaarel Vaidla, organized three sessions and a late night strategy salon to gather as much feed-back on the Strategic Direction draft as possible, similar to the Strategy Space during Wikimania 2017.

“We hadn’t had a lot of feedback from affiliates from the CEE region, so we wanted to find out more about what they think about the strategic direction. For us in the strategy team it’s very useful to be in touch with people personally, the most fruitful conversations about this happen in person. People have a tendency to be more honest in personal conversations, but probably also more friendly and constructive – sometimes in online conversations it’s just like: ‘don’t get on my nerves, I don’t care about strategy’. When you meet people, however, you can ask them what could contribute to them being interested in this.”

– How did you collect input from the CEE affiliates then?

“I did the sessions together with Kaarel Vaidla, who has been involved in this process all along. And we coordinated with Katherine Maher, so that she would be available in the sessions the whole time, because she is kind of the face behind the direction. Also, because we don’t work together on a day to day basis, we sometimes even made agreements in the sessions, we said, ‘Are we going to do it like this? – Yeah, we are going to move forwards like this’. So, not everything was completely set and fixed, it was an open atmosphere.”

– In relation to the Strategic Direction, there has been some discussion among Wikimedians about how to define ‘Movement’ and ‘Community’, respectively. How would you distinguish the two?

To me, the community really equals the individual contributors like editors, software developers or photographers, this is the community. Although I know that the WMF also calls the affiliates community. And the Wikimedia movement is this body that we are creating the strategy for: the network of Wikimedia organisations and communities (this is also how it has been differentiated in the strategy). And then there is the even bigger movement, which from my point of view should include our allies and partners as well. And then it’s not called the Wikimedia Movement, but the Big Open, or Free Knowledge and Open Internet movement.”

– As you said it has been difficult at times to motivate people to participate in the strategy process. Why should strategy matter to the individual Wikimedians you think?

“Well, if we don’t care about the world around us, we at some point may not be able to edit Wikipedia anymore. Our projects are for example only able to exist because of the laws that allow for free licenses. So one thing is all the copyright stuff, policy work and advocacy. Another thing is that if we want to be a reliable resource of knowledge with high quality in our content, then we also need diversity in our content and in our user base. I think every single person, I might be biased here, but every single person should be able to contribute to our projects, in whatever manner works best for them, and to be able to allow everyone to have and make use of this privilege we need to break down social, political and technical barriers, like it says in the direction.”

A month after the CEE meeting, the first phase of the Strategy Process is coming to an end. The 26th of October is Endorsement Day, where people can endorse the strategic direction on Meta. Everyone who feels like it is encouraged to celebrate that Wikimedia has made it this far. Stay tuned for phase two!

If you want to read more about what went on at the CEE Meeting, you can find the documentation on Meta.