From Damascus to Berlin: A very special internship at Wikimedia Deutschland

Can you tell me something about your background?

My name is Alaa Mustafa. I was born in Damascus and I am 28 years old. First, I studied in an institute for computer engineering for two years. Then I moved to university and studied for four years, with a major in information technology. Actually, after graduation, I didn’t work in that field. Rather, I was working in a company which sold consumer electronics – pretty much like Media Markt or Saturn here. There I worked in sales, in marketing, and in the business development team.

And then you came to Germany?

Yes, I came to Germany last summer, one year ago.

And what made you apply for an internship at Wikimedia Deutschland?

I’m a newcomer here, so I was looking for ways to integrate – Germany is a new country for me. I searched on websites for jobs in English and there I came across Wikimedia Deutschland. I reached out, got an interview, and then Lydia (product manager of Wikidata) accepted me.

Right now, you’re still waiting for the bureaucracy to sort out everything. Are you allowed to work now?

I may work, but it took a long time to get an approval from the Ausländerbehörde. The Agentur für Arbeit supports me, but right now I’m not allowed to make money through my work.

All in all, did you like the few weeks that you spent with us?

I liked it very much. Back in Syria, I had already heard of Wikimedia, a big organization and a great source for knowledge. I only worked here a bit over a month, for 45 days, but I feel really proud that I was part of this organization.

Let’s talk a bit about what you did here as an intern. I understand that you mostly helped Lydia?

Actually, I was working as an assistent for Lydia. There are many things on Wikidata pages that take a lot of time that Lydia doesn’t always have to do herself – things like updates on events or new features, so I did that.

But I was also asked about the website from the point of view of a user – not as a developer, but as an ordinary user: how does the website look like when a user opens Wikidata for the first time. We talked about possible improvements to the interface. Our UX team at Wikimedia Deutschland is currently working on the user experience and I was able to support them.

Last week you invited your colleagues for Arabic food for dinner. How did that go? 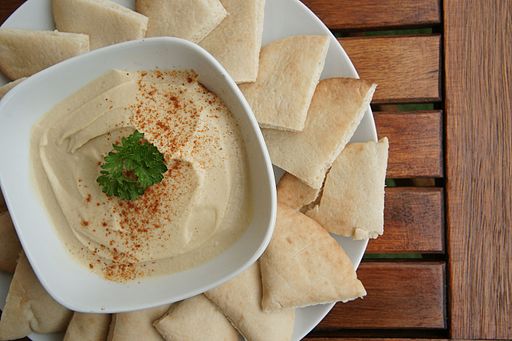 I wanted to have an opportunity to talk to everyone personally. Here, in the office, we always talk about work, but having dinner together gave us a chance to get to know each other personally. It was a very friendly dinner and that evening made me very happy.

I cooked something called Hummus (حُمُّص‎‎) and some rice with chicken. Typical Arabic food – two kinds of Hummus and chicken rice. It’s delicious! But you need to learn how to eat it correctly: with your hands, using bread to scoop it up.

So many people from Syria are now in Germany, I think we’ll soon see high quality Syrian food over here. You can already find good Hummus around Hermannplatz, so it’s a start.

Would you say that there are huge cultural differences regarding the work you did in Damascus and the work here? Or is work in IT the same all over the world?

The management side is definitely different. In Syria, even if your manager is wrong, you should go with him.

Here I feel that everyone can discuss everything freely and is listened to. We have a daily standup meeting where everyone has a chance to say something. I was only here for a little more than a month and I could give an honest critique about aspects of the product and Lydia never told me that I shouldn’t criticize things – rather, she appreciated it and took it as input.

Yes, things are different here. Discussion is very much valued. That makes the work very motivating. Everyone can discuss everything with everyone and it’s a very friendly atmosphere.

Anything else you would like to say? What comes next for you?

I now feel that these 45 days were… how should I say… I’d call it my “golden days” in Germany.

Within the next 10 days, I will start learning German at a school. I already studied German on my own with books, so I’m in a good position, but I really should go to school and take a proper course. That will take about 6 months, 4 hours every day.

After that I will search for work. Let’s see if Wikimedia Deutschland will have openings. But in any case, I’m proud that I was part of this organization and I will always try to keep in touch with you.