Die deutsche Version dieses Artikels ist hier zu finden. In my introduction I promised I would introduce the great people I will be …

In my introduction I promised I would introduce the great people I will be working with to make Wikidata reality over the next year. So that’s what I will do now that the project has started for real. 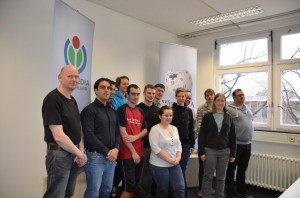 The project is lead by Denny Vrandečić. He founded Semantic MediaWiki together with Markus Krötzsch and has since been looking forward to bringing some of its potential to Wikipedia. Denny is going to oversee the whole project and make sure everything is running smoothly and going as planned.

Abraham Taherivand is the project manager and responsible for removing all impediments that are blocking the team from reaching their goals. He has more than ten years experience as a consultant, project lead and manager in various IT industry fields.

Daniel Kinzler is the lead software architect. He is going to decide how we are going to achieve what we set out to achieve on a technical level. Daniel has been working for Wikimedia Germany since 2008 already.

Daniel Werner, one of the developers, is the developer of a number of MediaWiki extensions like RegEx Fun and HashTables, and has worked on the RPG-Dev wiki, a wiki used for the authoring of role playing modules.

Jens Ohlig is one of the developers. Before he became a software developer he studied translation and languages (Korean and English). He was on the board of the Chaos Computer Club and helps out in the hackerspace movement.

Jeroen De Dauw is another one of the developers. He has been active around MediaWiki, and in particular Semantic MediaWiki, since 2009 when he was a Google Summer of Code student. Jeroen has since created about a dozen extensions, among them Maps and Semantic Maps, as a volunteer, consultant or contractor for the Wikimedia Foundation.

John Erling Blad is one of the developers. He is from Norway and has a formal background in programming. A couple of years ago he has worked with media in digital archives and various knowledge management projects, often based upon wikis.

Tobias Gritschacher is one of the developers. He previously worked on the Catroid project, a creativity platform as well as a crowd-funding platform.

Katie Filbert is one of the developers. She is from the United States and has been involved with the English Wikipedia since 2004. She hacks on MediaWiki and OpenStreetMap and is one of the organizers of Wikimania 2012. Outside MediaWiki she is a geographer and web developer and has worked in academia and government.

The whole team is supported by Silke Meyer, our assistant. Previously she has done research on common practices in Free Software projects and knowledge sharing.