The first month of Wikidata

Die deutsche Version dieses Artikels ist hier . The Wikidata team has been working for a bit over a month now … 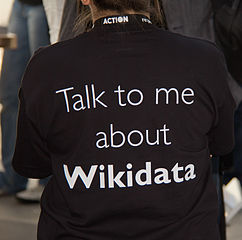 The Wikidata team has been working for a bit over a month now and first results are visible. We are posting daily updates on Twitter and identi.ca as well as weekly updates on Meta. I’d like to give you a short summary of the first month. It does not cover everything but should give you a good overview.

We started with a lot of introductions to Wikimedia, git, Wikidata and the ideas behind it for the part of the team that was new to it. This helped get everyone on the same page and ready to start working at full speed. Based on this we published some of the most important points that clarify our basic assumptions and requirements. The data model and the first part of the API have been published for comments too.

Coding started on the first phase of Wikidata – the interwiki links. The goal of that phase is to make it possible to store interwiki links (links in the sidebar linking to articles about the same topic in different languages) centrally in Wikidata instead of in the wiki text of each article in each language. We are developing two MediaWiki extensions that are the base for Wikidata: Wikibase Client and Wikibase Core. We have made good progress on this and are planning to have a demo system for you to try out soon. A lot of work has gone into the form-based interface for editing this in Wikidata already as well as being able to show the links from Wikidata in Wikipedia. Wikibase Core and Wikibase Client have been added to translatewiki.net where you can help out translate the extensions.

We held the first two rounds of Wikidata office hours on IRC and attended quite a few events. You can find the logs and schedule for the next office hours and other future events on the events page. Some of the events we attended lately: SMWCon, WWW2012, re:publica, Wikipedia Stammtisch in Berlin and the membership assembly of Wikimedia Deutschland.

We have started collecting articles in the press and blogs. I have addressed some of the feedback in a separate blog post.