Die deutsche Version dieses Artikels ist hier . At the beginning of the month the Wikidata development started. Since then a lot …

At the beginning of the month the Wikidata development started. Since then a lot of people heard about the project, discussed it, asked questions and told us about their worries. Thanks for that! The feedback has been very valuable. We have addressed much of it in the places it popped up at like the Signpost, Kurier, the project site on Meta and various news sites already but I wanted to collect and address the main ones here again. 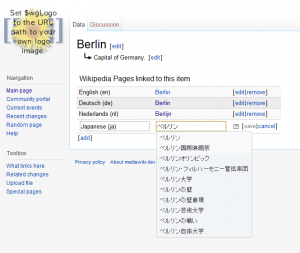 There is a worry that with one central knowledge base like Wikidata it will not be possible to represent the differing opinions on things like the population of a country with disputed borders. These differences exist and Wikipedia deals with them. But can Wikidata deal with them too? Yes! The most popular summary of this is probably an article on The Atlantic. Denny wrote a thorough and long comment in reply to that article. I will summarize it here:

One way to solve the issue partly is to give each language edition its own Wikidata instance. We have considered doing this. However in doing so a lot of the benefits of Wikidata like shared workload would be lost. And it would mean that speakers of one language would stay in their own carefully crafted filter-bubble. Languages are probably also not a good dividing criteria when it comes to controversial content. We decided to have just one place where data will be stored. This does not mean that we expect the whole world to come to a common decision on controversial statements. That is close to impossible and would be foolish to require. Instead we are building Wikidata in a way that it is able to deal with the diversity of the world we live in. We expect it will follow Wikipedia’s spirit and require citations and references for the data. Editors might not be able to come to a conclusion about the individual facts but they should be able to agree that a certain source contains a certain statement (for example that the CIA World Factbook lists an estimated population size for Israel of 7,590,758 currently). Wikidata will collect many of these statements and their sources and the editors will be able to chose which of them they choose to display. This way these differing opinions will be collected and visible in one place.

Another important thing to consider: Wikidata is an offer, not a mandate. This means that editors will be able to opt-out of using Wikidata for certain data or articles.
All in all the development team is very aware of these concerns and has taken them into account from the very beginning in the design of Wikidata.

from data to knowledge

Another worry that was brought up was that people will focus on data instead of knowledge in the future. You will still need someone to make knowledge out of the data Wikidata will contain. Wikidata will not and does not want to change this.

Closely related to this is the expectation that editors are going to add data to articles without being able to put them in context and knowing what is behind the data they found. Wikidata will help address this by being able to add additional pieces of information to a piece of data. This includes references, timestamps and so on. This provides some limited form of contextualization. But indeed the data in Wikidata, by design, will not be able to be as richly contextualized as it would be in human language text. Nor is that our goal. But we still hope that we will improve the factual accuracy and the recency of the Wikipedias, especially for languages with smaller editor communities.

One problem that will always arise in a place of global collaboration is the language barrier. Wikidata is no exception. Wikidata will have the advantage that it will not deal with prose but instead small chunks of data. The interface of Wikidata will be translated and it will be possible to show data localized as well.

The problem arises in discussion pages. In the end this will probably work similarly to how it currently works on Wikimedia Commons.

permissions and visibility of changes in Wikidata

A very important point that was brought up is who will actually be able to edit the data in Wikidata. Since the data will be used in a lot of places in the Wikipedias and beyond it will be a place prone to vandalism, just like Wikipedia is. It will be possible to restrict editing in the same way it is currently possible on Wikipedia. The exact rules for this however will have to be decided on by the community. The team doing the initial development will not decide on whether and how to restrict editing access.

A related point that was brought up is how editors are actually going to be able to keep up with edits in Wikidata. Wikidata itself will have the recent changes system editors are already familiar with. We are also trying to make these changes visible in the history of the individual articles that use specific data from Wikidata. Because of this it is also our goal to grow Wikidata slowly (by for example initially not importing large amounts of existing data). By growing the community around Wikidata along with the amount of data in it we hope that Wikidata will grow into a healthy project, with a strong community to decide on its future development.

I hope this clarifies some of the initial questions that were raised.