Inside out on Wikimania

I pull out a large cardboard box from under our table in the community village, it is pretty smashed up …

I pull out a large cardboard box from under our table in the community village, it is pretty smashed up after its transatlantic journey. Drums start pounding in the conference hall while I put out cups, brochures and t-shirts.

“Hello”, a friendly and careful-looking man stands next to the table, “so you are from Wikimedia Deutschland”, he states.

“Yes, I just started working in the International Relations team a month ago, and here I am, at Wikimania”, I look at his name tag: Magnus Manske, Cambridge… erh, something.

“Are you part of the German community then, or the British?”, I ask. – It is Friday morning, first official day of Wikimania 2017 in Montréal, and I have a steep learning curve in front of me.

To be fair, I started ascending the curve at sea level approximately a month ago when I slowly started wrapping my head around Wikimedia Deutschland: it is a pretty complex organisation, I thought. The slope then started tilting upwards when I spent Thursday on the pre-conference following the WMCON Follow-up day, taking notes. My pencil (yes, pencil) was struggling to keep up with every single word and empty space from those meetings and thus began sketching the first pieces in my Wikimania puzzle:

From organising local volunteer meetups, literature and software access for local Wikipedians; over strategic partnerships with Mozilla, research institutions and government bodies; to how to best facilitate cultural translation in order to get messages across a global movement – while including local communities in the process.

Presently, this Friday morning, someone asks a question and I turn my attention away from the friendly gentleman, Magnus. The next time I see him he is on stage being interviewed for the Wikimedia 2030 Panel, as ‘The Magnus’. 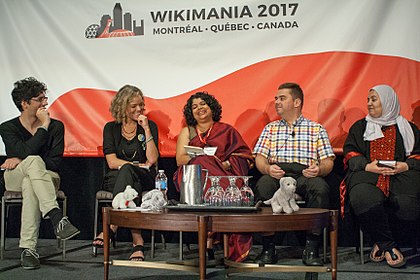 Cuteness, knowledge and the gender goat

As a relative newcomer, and as someone who has mostly been in touch with meta-issues, I spend the three days rather floating around on the surface of Wikimania. I grapple with the paradox of how Wikimania, like Wikimedia, seems to be both somewhat revolving around itself and at the same time inherently dedicated to openness and transparency. How can an organisation include, in random non-hierarchical order, a cuteness association, thousands of volunteers interested in seemingly secluded and very particular topics (examples overheard at breakfast: Russian minority languages, squirrels), a mysterious goat craze, and a dedication to democratize the internet? It is all here, plus more, trying to adjust to conference format.

Saturday, I go to Knowledge, Democracy and the Wikipedian Gender Gap, where the argument put forward is that Wikipedia reflects society: women write on Wikipedia to a lesser degree than men because they do not have time (they are doing laundry and raising children). At the end a woman, she seems upset, questions the ‘lack of time’ argument, asking how then women do have time to volunteer in (analogue, non-wiki) local communities around the world as the most active members in those. The question perplexes the speaker who replies: “I will have to think about that – but I’ll be happy to talk with you now, after the session”. And then it is over, just as it got interesting. On sunday, Moriel Schottlender (software developer, WMF) seems to hit the nail a bit straighter when she presents her ‘concept replacer’ at the Hackathon Showcase: It simply replaces “she” with  “he” in any text, and makes you wonder why the marital status is included in the first paragraph about some important and interesting people, and not others. 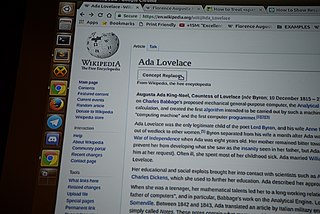 To the Future, and Beyond

At the end, after having bobbed around for three days, the Wikimania themes that most stand out to me are the Strategy Process and Wikidata, giving an impression of Wikimedia being in a phase of new adaptation. Especially Wikidata is mind-blowing in its potential to make a sort of ‘everything is everything’ data map of the world, and somehow the organisational development has a similar quality.

Something that Katherine Maher said during ‘The Big Open: A conversation between Katherine Maher (WMF), Ryan Merkley (Creative Commons), and Mark Surman (Mozilla)’ sticks with me; something about Wikimedia being like the bumble bee that does not know that it cannot fly. I am not sure if this is what she meant, but I am impressed by an organisation that is able to stretch this wide, and not break on the middle and crash. I think the energy and effort invested in the Strategy Space, to include as many people as possible during Wikimania, testifies to the importance of maintaining cohesion within a growing Wikimedia.

Although we at Wikimania this year mostly consisted of a beige and pink crowd, and although a lot of people were rejected visas, there still was a richness of subcultures, luckily with some inter-marriage and overlaps: The techies, the encyclopedians, the linguists, the entrepreneurs, the strategists. – Necessarily representing different opinions and interests. While pondering on this it hits me, the solution to the self revolving vs. open paradox that Wikimania is to me: exactly because Wikimedia is so all-encompassing within its open knowledge eco-system and rooted in so many different local communities, pointing in every which direction, the inside also is the outside! Like it says in the draft 2030 Strategic Direction: „Wikimedia will welcome people from everywhere to grow fields of knowledge that represent human diversity“ and, by implication, create the infrastructure for open.