The following post is a guest blog by Fred Johansen about EventZoom.

Just as today’s online maps are being continually updated, historical maps can be automatically generated and updated to reflect our ever-evolving knowledge about the past. As an example, please allow me to tell you about a project that I’m working on. Recently I implemented an event visualization site which accepts geolocation data combined with info about time spans of events, and renders the input as points on a map zoomable in time and space. Each such point is an object with a title, description, latitude / longitude and a time, as well as a reference back to its source. But what source should be used to fill this framework with data? Even though this is a tool born outside of the Wikimedia world, so far the best content I’ve found for it is Wikidata – more specifically, the Wikidata API. By importing data about events that are part of larger events all defined in Wikidata, with the restriction that they contain a start or end date as well as a location, that’s all the data that’s needed for representation in this kind of dynamic historical map. 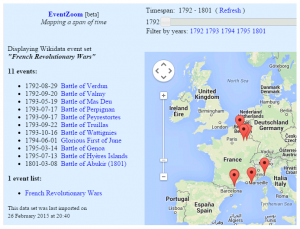 Extracting data from the Wikidata API works like a charm. Sometimes, of course, some data might be missing from Wikidata. For example, an event may contain an end date, but no start date. So, what’s fantastic about Wikidata is that it’s easy to simply extend its data by adding the missing fact. In addition to helping in increasing the data of Wikidata, this also improves the overall possibilities for visualization.

This very activity serves as a positive feedback loop: The visualization on a map of, for example, the events of a war makes errors or omissions quite obvious, and serves as an incentive to update Wikidata, and finally to trigger the re-generation of the map.

The site I’m referring to here is EventZoom.net – currently in Beta and so far containing 82 major event maps and growing. You can extend it yourself by triggering the visualization of new maps: When you do a search for an event, for example a war, and the Search page reports it as missing, you can add it directly. All you need is its Q-ID from Wikidata. Paste this ID into the given input field, and the event will be automatically imported from the Wikidata API, and a map automatically generated – with the restriction that there must exist some ‘smaller’ events that contain time & location data and are part (P361) of the major event. Those smaller events become the points on our map, with automatic links back to their sources. As for the import itself, for the time being, it also depends on wdq.wmflabs.org, but I expect that will change in the future.

Although you can always click Import to get the latest info from Wikidata, an automatic update is also in the pipeline, to trigger a re-import whenever the event or any of its constituent parts have changed in Wikidata. As for other plans, at the very least our scope should encompass all the major events of history. Here, wars represent a practical starting point, in so far as they consist of events that are mostly bounded by very definite time spans and locations, and so can be defined by those characteristics. The next step would be to extend the map visualization to other kinds of events – as for Wikidata, it could be interesting to visualize all kinds of items that can be presented with a combination of geolocations and temporal data, and that can be grouped together in meaningful ways.