Data is the new groundwater!

Data debates usually only revolve around who can earn money with data and how. Unfortunately, that leaves out a lot of important questions for Free Knowledge: Who should benefit from public data and its processing? How can the protection and preservation of data be ensured? Much more needs to be said about the common good in data policy. We therefore propose a new data metaphor.

Digital policy today is also data policy. The convening of the data ethics commission to advise the federal government and proposals for a data-for-all law, for example, show that the handling of data is increasingly becoming a central political issue. 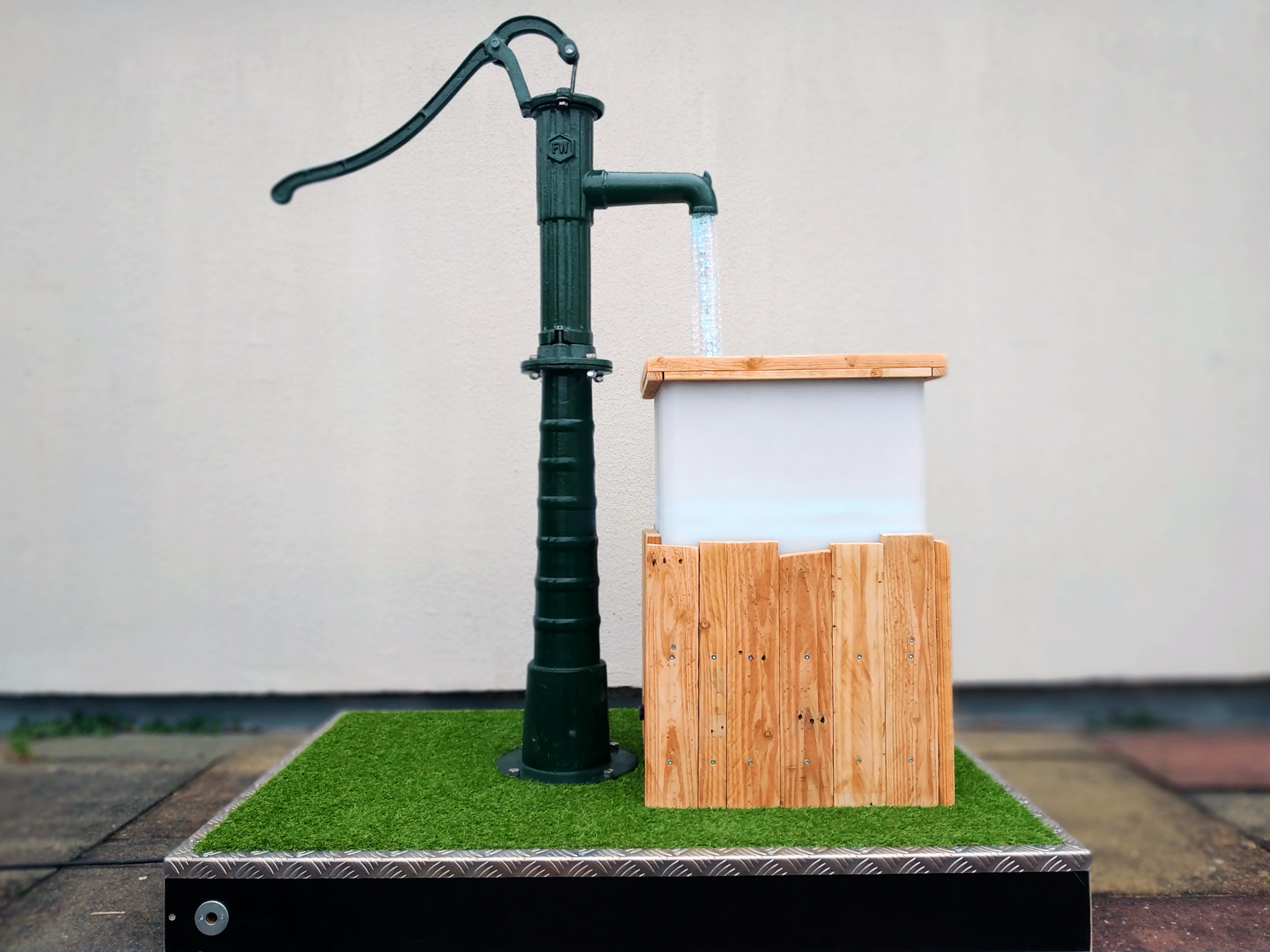 The pool fills up with each pump – and data from the free database Wikidata appears on the monitor. Data pump by Wikimedia Deutschland. CC BY-SA 4.0

However, there is a problematic fixation within data policy debates: They usually revolve around the question of who may earn money with data and how. The metaphor of data as the raw material of the future has been unavoidable for years. The concentration on economic aspects of data policy however is a very narrow interpretation of the topic, which simply ignores important questions for Free Knowledge: When is data common property? Who should actually benefit from public data and its processing? Whose “property” are they? How can the protection and preservation of data be ensured?

Over the years, the picture of data as the oil of the 21st century (which Wikimedia Deutschland has also partly served with the data filling station) has swayed the debate into the wrong direction. Nonetheless, politicians continue to make efforts in this direction, thereby consolidating a one-sided visual language and a problematic basis for data policy decisions.

The more often metaphors are used in political communication, the more powerful they become. Those who speak of data as the new oil deliver a whole image spectrum: Price and distribution struggles, gold rush sentiment, monopoly building and an inevitable power struggle for resources, led by states and powerful corporations. On the one hand, data is usually presented in the media as a potential commodity on which any economic innovation depends and on the other, it’s portrayed as something whose extraction is a constant danger to people’s right to privacy.

The image of data as “new oil” fuels this far too simple dichotomy. It promises immense wealth for those who successfully enter the data economy and data dictatorship for the rest of humanity. Particularly in debates on data policy and economics, visual language pays a crucial role in understanding the scope and significance of data policy decisions as well as in shaping them.

We think the image of data as oil urgently needs an update. Data policy must pay far more attention to the common good. We therefore propose new data metaphor: Data is the new groundwater!

Data about the world should in principle be freely available to the general public and, like groundwater, it should be of benefit to everybody. Data is created all the time, it changes without wearing out and may only become a commodity under certain conditions. For the information society, data resembles groundwater much more closely than oil. Just as a world without water is inconceivable, data forms the basis for Free Knowledge as on Wikipedia.

In 2014, Wikimedia Deutschland built the data filling station where free data could be “refuelled” in order to make access to Free Knowledge a tangible experience. It has since enjoyed great popularity as an exhibit at conferences such as “re:publica” or “Zugang Gestalten!”.

Therefore, we want to create a new image for data and information – data as groundwater – and in return realize a physical object as its messenger: the data pump. As an internationally and intuitively understandable object that can make groundwater available to everyone, a hand pump is the ideal solution. In many countries, such a pump is still used to supply water and can often be found near the roadside.

The data pump was designed, built and programmed by the Berlin media artists and net hobbyists Georg Werner, Moritz Metz and Kaspar Metz. Our data groundwater pump shows randomly selected data from the Free Knowledge database Wikidata during each pumping process. This makes it possible to experience: Data about our world (such as weather or traffic data) should not (only) be treated politically as a commodity, but should also be freely available to all people as common property. 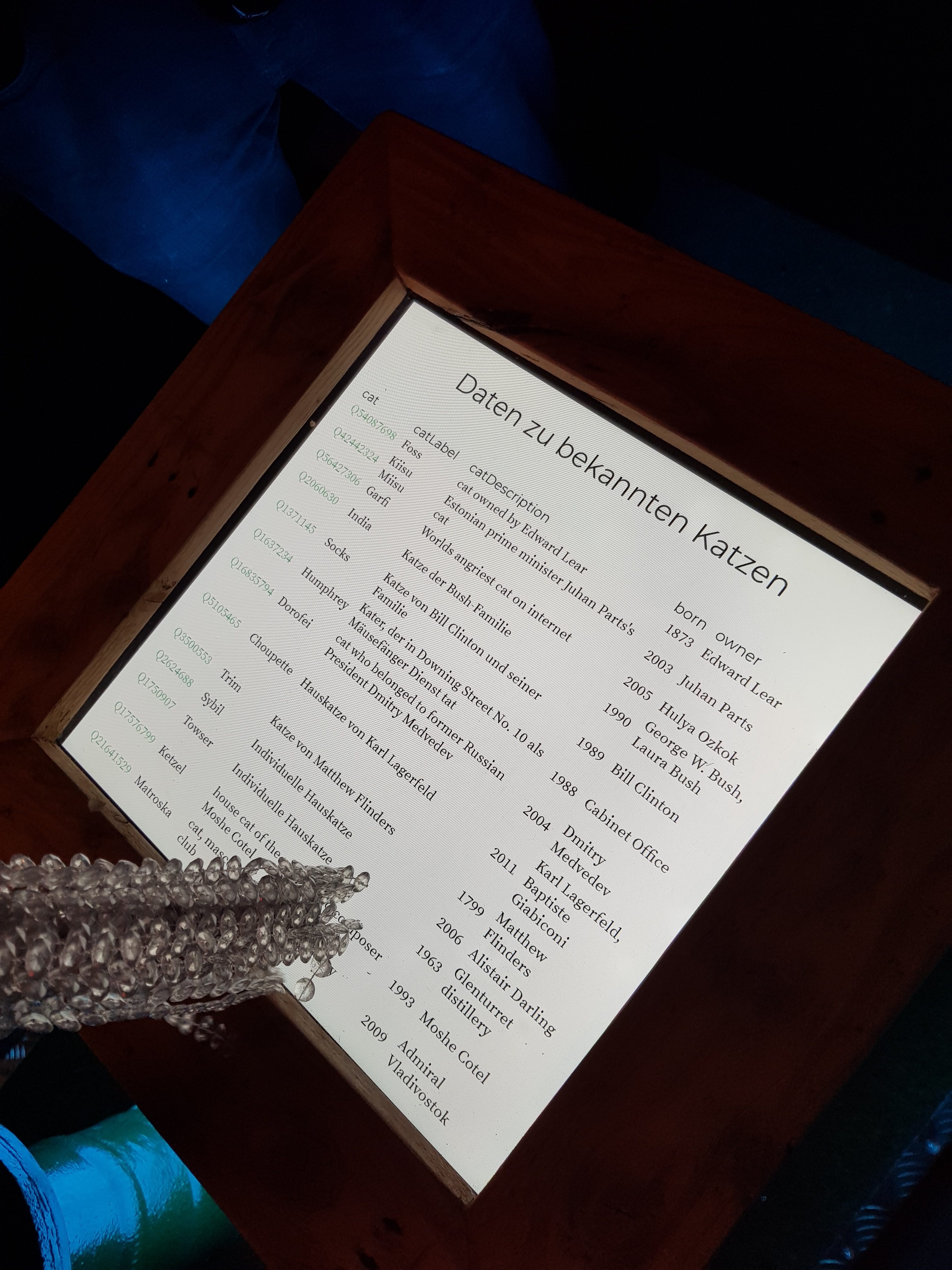 Famous cats or flags with stars: All these data can be found as Free Knowledge in Wikidata. Data pump from Wikimedia Germany. CC BY-SA 4.0

The converted garden water pump stands on a manoeuvrable and lockable platform. In front of it there is a bucket on which a water level is indicated by an LED. A screen embedded in the bucket displays the results of data queries. When you operate the pump, you hear a typical water pump sound, combined with the modem dial sound that many of us still remember. With every pump stroke a bucket of water fills up with data from the free database Wikidata.

Water and data: Everything flows….

The comparison of data and oil is helpful to consider the impact of oil prices and the availability of oil on the environment as well as global economic and social inequalities. The picture of a similar development with data in place of oil can serve as a reminder to deal with data differently, to avoid monopolies and to allow everyone access to data as equally as possible.

However, the metaphor of data as oil is also problematic in several respects. First of all, the image of data as oil implies the idea of a raw material as an intermediate product that has to be refined and can become scarce – or artificially scarce – through heavy use. While oil can only be burned once, data is infinitely reusable and reusable.

While access to crude oil and the establishment of the processing industry is guided by political and economic interests, free access to (public, non-personal) data should be a matter of course, serving the common good and giving the individual the freedom to derive information and knowledge from it.

In accordance with the premise of education as a human right, we would like to set the image of (public) data as groundwater that can be processed into freely available information. In doing so, we counter the current data-gold grave mentality and shift the corresponding framing in the direction of public welfare orientation. Data as groundwater symbolizes a resource that is vital for the information society and in need of protection, the greatest possible “purity” of which should be the aim. Like groundwater, however, data should not only serve the profit of large companies, which we would like to draw attention to with the new framing.