WikidataCon, the first conference dedicated to the Wikidata community took place in Berlin on October 28th and 29th. How to summarize this event? It was a huge success, both from the point of view of the community and the organizing team, and we hope that you enjoyed the event as much as we did. We can already deliver some amazing numbers: 200 attendees, including 50 helpers, 78 speakers, 50 scholars, not including 20+ plushies. We had more than one hundred sessions with a total of 40 hours of video recorded, we had 20 birthday presents, we had 43 countries represented and almost as much sweets on the sweets table!

We are especially happy that WikidataCon may very well be one of the best documented Wikimedia events. Thanks to the wonderful people at C3VOC, recordings of presentations were online just hours after they were given! The list of all recordings is impressive.

Topics that were discussed at the weekend include: 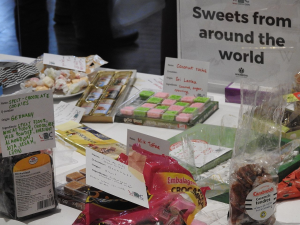 Apart from making WikidataCon a well documented event, we focussed on making it your event in as many ways as possible: a programme created by the community with a high level of participation (almost half of the attendees also gave talks or presentations) — all in all a conference to give more access to more knowledge to more people.

Giving more people more access also means the little things like inclusiveness and a friendly atmosphere for everyone. We are happy that 200 people came to Berlin to celebrate Wikidata with us.

WikidataCon will return in 2019. In 2018, celebrations of Wikidata’s 6th birthday will be organized by the community. One thing that WikidataCon has shown us all, that this community is excellent. Thank you, Dankeschön, Merci, Q2728730!