And the winner is…

(Die deutsche Version dieses Eintrags ist hier .) 3 and a half months ago Wikidata development started. As a new Wikimedia project … 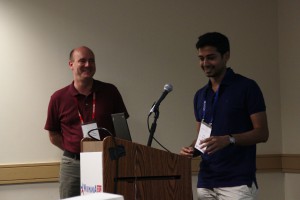 3 and a half months ago Wikidata development started. As a new Wikimedia project it obviously also needs a logo. We have asked people in the community to submit logo proposals and then to vote on them. Voting time is now over and we have a winner! It was a tough choice between the 33 excellent submissions that made the voting list. Thanks to everyone who submitted a proposal. We were delighted by all the submissions that all expressed the ideas behind Wikidata in their own way.

And here is the winner:

This logo was created by Arun Ganesh (User:Planemad) and received 89 of the nearly 1000 votes. Congratulations!

Oh and of course we’ll be creating some swag like t-shirts and stickers with the new logo soon. Let us know what you’d like to have.